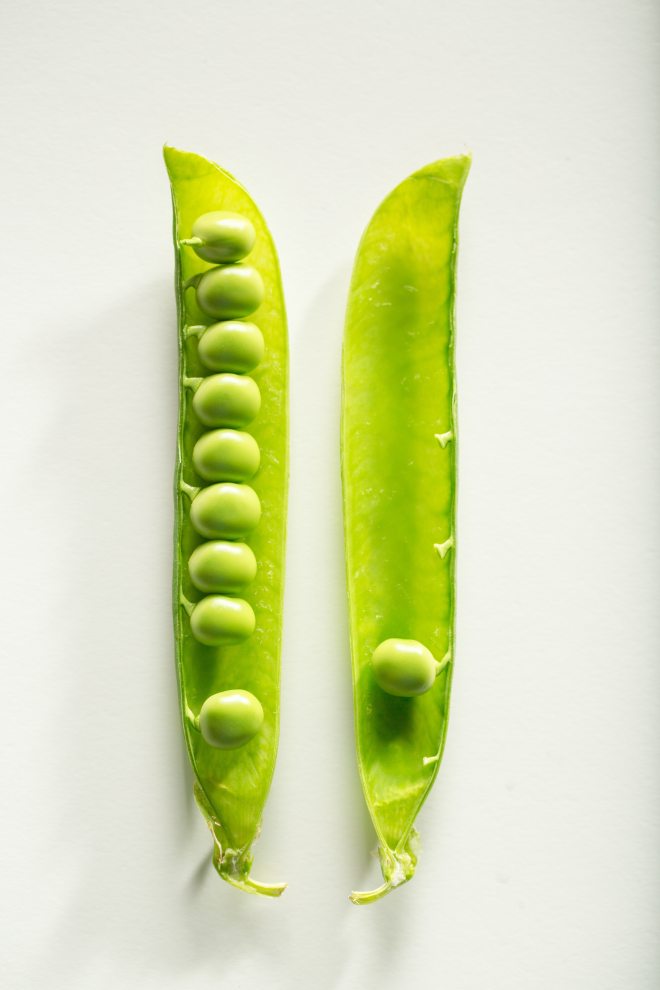 As previously mentioned, my childhood recollection of peas is a pile of tiny, grayish-green balls dumped out of a can for reheating.  I established pretty early on that if that night’s dinner included peas, I would be confining myself to lettuce as a vegetable side dish.  I don’t remember ever eating frozen peas, but I imagine that if such a thing were presented, I would still have boycotted it on the basis of peas being peas.

However, I do recall trying fresh peas once as a kid.  We had a wonderful neighbor who planted a large garden and shared produce with the other families on the block.  We dragged our little red wagon up to his house on the corner and filled it with corn, tomatoes, peas, and the inevitable zucchini.  I remember cracking open a pea pod to see that the balls inside were much larger, brighter, and firmer than the barely-not-mush balls routinely served at our house.  I ate one for comparison and found that it was indeed much crisper and fresher (which makes sense having just been plucked from the vine).  I also remember it tasting overwhelmingly of….plant.  There is no other way to describe it.  The ball had the same texture as a really soft seed (again, logical), and the exterior pod was stringy plant fiber and water, but both tasted like grass or a leaf.  (Toddler me had literally done that field research.)  It also left a planty aftertaste that I posited must be the chlorophyll.  Conclusion: different, but not better.

Fast forward to any party where some inconsiderate jerk has already cleaned out the grape tomatoes and baby carrots from the ubiquitous Costco veggie tray.  It’s go hungry, or down some pure roughage.  As with Iocaine Powder, I have built up an immunity to snap peas, but I’ve never really enjoyed them.  I always “de-string” them by snapping off the ends and pulling off the long fibers running the length of the pod even if they’ve previously been trimmed.  I can eat them raw (straight up, without a Ranch chaser) and cooked, but I never buy a whole package unless I’m planning a party or making New Year’s resolutions.